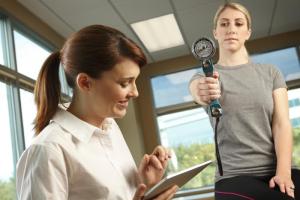 You may have noticed that at least 10 different types proprietary functional capacity evaluations (FCEs) are commonly reported.  These include the Blankenship, Ergos Work Simulator and Ergo-Kit variation, the Isernhagen Work System, now known as the WorkWells System FCE, Hanoun Medical, the Physical Work Performance Evaluation by Ergoscience, WEST-EPIC, Key, Ergos, ARCON, and AssessAbility! The goal of this post to identify some key differences among some of the most commonly used proprietary systems.

While systems continue to develop, the most recent comparative studies are from the early 2000s and do evaluate the some of the most widely-used systems including the WorkWells System, Blankenship, ErgoScience’s Physical Work Performance Evaluation and Key Method Functional Capacity Evaluation.  Some of the differences among the various FCEs include the number of measurements taken and the equipment used, the standardization of the test, and the underlying theories upon which they are based.  However, they all share the common goal of attempting to measure work-related functional performance in an objective manner.  According to King, et al., additional differences include the ways in which the FCEs assess cooperation and sincerity of effort and safety, determination of end points for stopping clients’ during performance of lifting and strength tests, use of isometric testing, training processes, degree of work simulation, ability to alter the test design, generic versus job-specific testing, expense of equipment, use of algorithms for scoring, methods of projecting endurance to an 8-hour workday, degree of standardization, evidence of reliability and validity.1

A critical quality of an FCE is that it be valid and reliable. Reliability refers to the results being consistent and may be in the context of the same evaluator arriving at the same result repeatedly during an assessment (intra-rater reliability) or different evaluators arriving at the same result (inter-rater reliability). Validity is also important, as a valid FCE indicates that the test can accurately predict one’s work ability — that is the results of the test accurately predict function in a real world work setting.

The WorkWells System FCE, developed by Susan Isernhagen in 1988, consists of 29 items related to five performance categories (weight handling and strength, posture and mobility, locomotion, balance, hand coordination). Research has demonstrated inter-rater reliability and predictive validity of the WorkWells System to be moderate to good, while construct and concurrent validity of the system were not demonstrated. 2

The Key Method was developed by Glenda Key in 1987. Very little information is available on the company website, but they state that their “evaluations measure a person’s abilities in lifting (at three identified heights), pushing, pulling, carrying with the right, carrying with the left, as well as identifying specific tolerances for sitting, standing and walking.” The Key Method “also identifies endurances for non-weighted activities, such as bending, squatting, crawling and kneeling”. The Key Method does not have published validity and/or reliability studies in peer-reviewed journals, but does rely on non-published research. 2

Our practices uses the Ergoscience Physical Work Performance Evaluation developed by Deborah Lechner in 1988. The Physical Work Performance Evaluation (PWPE) consists of 22 tasks divided into 4 categories, including strength, position tolerance, mobility and endurance, during which several of the items are repeated in order to help extrapolate to the 8-hour workday.  The PWPE was designed out of need for a well-designed and validated test, as none on the market met these criteria when it was developed in 1988. Rigorous research went into the design of the FCE, and thus ErgoScience states that their system is the only research-developed and fully validated measurement tool available to accurately and objectively measure an individual’s physical capabilities. Furthermore, the protocol emphasizes standardization, objectivity, reliability and validity in clinical measurement.

A well-designed FCE must have research behind its development, and it is imperative that research also supports the validity and reliability of the system in order to be defensible in a court of law. The ErgoScience Physical Work Performance Evaluation   has been studied and found to be reliable and valid, objective and standardized, and presents clear conclusions in its reports, and we are confident that the test is well-designed, comprehensive, and well-researched, allowing us to accurately predict our clients’ abilities to return to work.