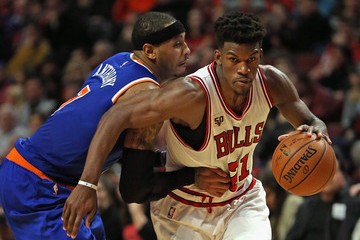 Jimmy Butler, commonly referred to by many Chicago Bulls fans as “Jimmy Buckets”, has been dealing with a left knee injury over the past two months, coming at the most inopportune time as the Bulls are vehemently fighting for the 8th and final playoff spot with the Indiana Pacers, Detroit Pistons, and the Washington Wizards. Mr. Butler has made huge strides in his basketball skills this year and, in my opinion, is one of the main reasons the Bulls are even in the playoff discussion! In January, he dropped 53 points against the Philadelphia 76ers.

What happens after a knee injury and how does one return to high level play?

Jimmy first injured his knee on February 5th, 2015. From the video, the injury appears to be a non-contact injury to his left knee, occurring either as he was using his left knee to push off as he attacked the rim, or possibly while he was in mid-air and extending his left knee. Over the course of the next few days, we learned that Jimmy had an X-ray the night of the injury and later an MRI. The MRI revealed that the left knee is structurally intact, meaning no damage to the menisci (cartilage) or ligaments. The official Chicago Bulls release stated that Jimmy suffered a muscle strain to his left knee.

On February 9th, 2016 the Bulls declared that Jimmy Buckets would miss 3-4 weeks due to the knee strain. Over the course of the next 3-4 weeks, Jimmy proceeded through a specific rehabilitation program to get him back to the court and putting the biscuit in the basket.

The initial x-ray to ruled out any fractures or dislocations to the bones around the knee. While he most likely would have an MRI in the next day or two, depending on the amount of swelling, to image the soft tissue structures (ligaments, meniscus or cartilage of the knee, and tendons of the knee).  Now, if Jimmy were playing in a pick up league at his local church, he probably would not undergo an MRI so quickly.  However, because he is a high profile NBA player, the Bulls are in the playoff hunt, and they have invested so much in Mr. Butler, they want to know right away what he has injured to plan for his return to the court.  Based on the diagnosis of a left knee strain, the MRI might have shown fluid or swelling around the tendons, possibly his hamstring tendons. The presence of this fluid would indicate an inflammatory process is occurring.

The night after the injury and the next day, his care would likely focus on symptom management with ice, rest, compression, and elevation. His providers might utilize electrical stimulation to help manage pain or reduce swelling. He might also be prescribed a non-steroidal anti-inflammatory drug (NSAID) to decrease inflammation at the area of injury. Since basketball is his job, he might participate in treatment multiple times throughout the day to speed healing.  His care might also include soft tissue mobilization and manual techniques applied to the quadriceps, calf, and more proximal hamstring musculature, avoiding painful areas and helping mobilize swelling away from the knee.

Jimmy might have been immobilized in a knee brace and instructed to use crutches (mostly non-weight bearing) for a couple of days to control symptoms and facilitate healing in the knee. However, he would not have been on crutches for more than a couple days, especially for only a strain, because the goal is for him to still activate the muscles around the knee and avoid losing strength, promoting quicker return to play.

Once symptoms are improving (swelling and pain), treatment would focus on pain-free range of motion, assisted techniques, such as heel slides with a cord pulled by Jimmy to improve range of motion or bending the knee through wall slides with foot on a towel. Manual therapy may continue with additional techniques to decrease swelling, but may become more aggressive to improve mobility in the musculature above and below the knee, such as gluteals, upper quadriceps, inner thigh and calf muscles.  Strengthening might progress to non-weight bearing exercises, such as 4-way hip strengthening or knee extensions if not painful. Cycling at pain-free or low levels of pain (1-2/10) has been reported by Mr. Butler, improving range of motion and maintaining his cardiovascular conditioning.

As symptoms improve, weight bearing exercise, including single leg balance and stability exercises or low weight leg press might be incorporated.  At this phase, he could begin shooting baskets with no jumping, as long as someone is rebounding for him, eliminating the impact forces of basketball.

At the point when Jimmy was feeling better and walking without difficulty, he would initiate jogging, first jogging the length of the court and walking the width (baseline) of the court. To progress from the initial jogging to running, intensity would progress from 50% to 70% to 90% of a full sprint, again running for the length of the court and jog the width of the court. This coincides with where he was in his rehabilitation around February 26th, 2016, when he had progressed to straight ahead movements, but was still avoiding on lateral movements. Jimmy would have been allowed to progress to lateral movements when he could run and sprint full speed. At this point, he would have been able to participate in walk through drills with the team, but was still about a week away from returning to full participation in games.  Rehabilitation would continue to focus on improving strength, neuromuscular coordination, explosiveness, power, and balance.

Reintegrating with the team would start with participating in half court drills without contact, focusing on cutting, pivoting, and lateral movements. Without any complications, he would be progressed to contact in half court, and eventually participate in full court drills. Now, throughout this time, Jimmy participated in warm-ups with the team before games, but remained on the bench during games. Before he was ready to return to the line-up, he had to be able to participate at 100% in all phases of the game.

Jimmy did eventually return to the line-up, 4 weeks later against the Houston Rockets, but he had a set back after the game with swelling in the left knee. He missed a few more games, but was able to return on March 14th against the Toronto Raptors. As the Bulls are contending for the last spot in the playoffs, every game counts, and the Bulls want one of their most productive players on the court. Sometimes, a player can show progress and pass return-to-play tests and drills, but still needs more time before being reinserted into the line-up. This may have been the case with Jimmy’s flare up. You can imagine the immense pressure on the physical therapists, athletic trainers, and coaching staff to get Jimmy back to 100% so he can to help the Bulls clinch a playoff spot, without returning him too quickly, and further jeopardizing his full recovery.

Jimmy does seem to have recovered quickly, and we anticipate he will be back in the line-up for the foreseeable future. He has played in the last 5 games with the Bulls, seeing considerable minutes, indicating that the muscle probably has healed properly. He may continue with treatment after the game with ice and massage pre-game as needed. On Thursday 3/17/16, Jimmy had 22 points against the Brooklyn Nets. I would say Jimmy Buckets is back and ready to help your Chicago Bulls to the playoffs!

Hunter Van Houten, PT, DPT, is a physical therapist at PhysioPartners.  He can be reached at huntervanhouten@physiopartners.com.