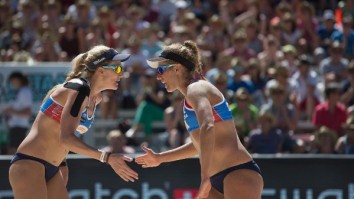 Professional Volleyball Player Kerri Walsh Jennings is Back for More

This past year, Olympic gold medalist and professional volleyball player Kerri Walsh Jennings has showed us that “playing with one arm behind your back” can be more than just an expression.  Kerri Walsh Jennings dislocated her dominant right shoulder in May 2015 while competing and then did it AGAIN in July. How did such an elite competitor and athlete respond to this devastating injury? She had her shoulder reset, finished and won the match!  She then proceeded to compete through August of 2015 primarily using her LEFT HAND and underhand serving — something never seen before at an elite level!

Eventually, Kerri underwent a torn labral and capsule repair surgery followed by six months of intensive rehabilitation before returning to the beach. The shoulder girdle is composed of complex structures, including a labrum of fibrous tissue surrounding the “socket” that gives the joint more integrity and a capsule of tough, membranous tissue that covers the shoulder joint itself.

Kerri Walsh Jennings and her partner April Ross now look true to form and just in time, beating the first-ranked Brazilian team of Larissa and Talita in the most recent Federation of International Volleyball grand slam in Moscow, Russia. They had not yet beaten Larissa and Talita in competition, the team is very likely to be a Gold Medal match-up. Kerri Walsh Jennings will be competing in Rio in the upcoming Olympics with her sights set on making history — to be the first female competitor to bring home an astounding 4 Gold medals in consecutive games.

Joseph Ascher, PT, DPT, is a physical therapist at PhysioPartners and a professional volleyball player.  Schedule a complimentary injury screening to address those shoulder aches and pains that are keeping you from competing on the beach!