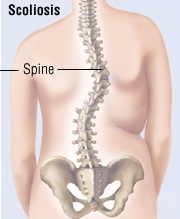 While the United States Preventive Services Task Force continues to state that there is not enough evidence to weigh the benefits and harms of screening for idiopathic scoliosis in asymptomatic youth ages 10 to 18 years in a draft statement, this position is a loosening  of the task force’s 2004 guidance that decisively recommended against such screening.

The task force does state that adequate evidence exists to support that screening accurately detects idiopathic scoliosis in adolescents.

The task force continues to report that no direct evidence supports screening’s effects on patient-centered health outcomes and that evidence on the effects of treatment with exercise or surgery was considered inadequate. While in the past, the value of a screening examination for scoliosis has been debated due to inconclusive evidence of the success of non-operative treatment for scoliosis, the 2013 BrAIST study does establish the effectiveness of bracing as effective early, non-operative care.

The BrAIST study, a randomized clinical trial, asked the question of whether bracing is effective in growing children and adolescents with curves between 20 – 40 degrees.  The study demonstrated that the bracing of adolescents with moderate scoliosis was an effective treatment, based on the reduction of the number of patients who progressed to needing surgery. In addition, a dose response was found between the number of hours of brace wear and the success rate of bracing.

242 patients participated in the study and patients in the bracing group were assigned to wear a brace 18 hours per day, which is a typical bracing prescription.  Patients in the observation-only group received no additional treatment.  The end point of the study was “treatment failure”, defined as progression of the scoliosis to 50 degrees or “treatment success”, when skeletal maturity was reached without progression to 50 degrees.

72% of brace wearers avoided surgical recommendations, but only 48% of patients in the observational group avoided recommendation for surgery. Furthermore, the rate of success achieved by those patients who wore the brace for 13 hours or more was greater than 90%, demonstrating that the amount of time the brace is worn is critical to the outcome.  The study provided strong evidence to the value of brace treatment for those adolescents at high risk of progression of surgery.

In addition, at this point, multiple randomized controlled trials support the utilization of scoliosis-specific exercise, known as physiotherapeutic scoliosis-specific exercises (PSSE) and the Schroth Method, in treating scoliosis. .  The Schroth Method is a conservative treatment originally developed by Katharina Schroth, who had scoliosis, in 1921 in Meissen, Germany. The Schroth Method has been used across Europe in treating scoliosis since the 1960s and utilizes stretching, breathing and muscular retraining exercises to decelerate scoliotic curve progression in children and teens, manage postural pain in children, teens and adults and restore optimal postural alignment and control.

The task force states that another reason to not recommend screening is that we lack evidence of what the magnitude of spinal curvature will be at skeletal maturity and that inadequate evidence exists that screening can improve adult health outcomes.  The task force additionally reported that, although some evidence suggested bracing could decrease spine curvature, evidence was lacking on whether curvature reductions in adolescence improved health outcomes in adulthood.

While we may not know how much impact screening and subsequent treatment can have on adult health outcomes, we have plenty of evidence of the negative impacts of scoliosis on adult quality of life.    Children’s bones are flexible and are at the greatest risk for scoliosis progression during puberty.  Interventions targeted at successfully minimizing curve progressions have potential to improve future quality of life and are very low risk.

Several national specialty groups have published statements in support of screening, including the American Academy of Orthopaedic Surgeons, the Scoliosis Research Society, the Pediatric Orthopaedic Society of North America, and the American Academy of Pediatrics, which advocate screening for scoliosis in girls at age 10 and 12 years and once in male adolescents at age 13 or 14 years as part of medical home preventive services, if performed by well-trained screening personnel.  However, the International Society on Scoliosis Orthopaedic and Rehabilitation Treatment recommends screening for idiopathic scoliosis by clinicians who specialize in spinal deformities through school-based programs.

PhysioPartners supports scoliosis screening for adolescents between the ages of 10 and 14 years to identify scoliosis and initiate early treatment.  This treatment, to be determined by their physician, may involve scoliosis-specific physical therapy exercises, bracing or surgery.

PhysioPartners physical therapist, Stephanie Penny, is trained in the Schroth Method and utilizes scoliosis specific exercises to address scoliosis in adolescents and adult population.  The most common statement from the adults is “I wish I could have done this treatment when I was younger.”

Stephanie Penny, PT, DPT, is a physical therapist at PhysioPartners in Lakeview and can be reached at StephaniePenny@physiopartners.com.