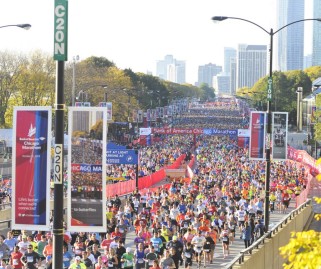 Human movement is a fascinating and complex subject. No other species on the planet has adapted their physical functions and abilities to such a wide variety of demands and environments. Of the various adaptations that have become integrated in our kinematics, there are a select few that humans perform better than almost any other living creature on the planet. We have incredible digital dexterity in our hands, and our upper body coordination allows us to throw objects with dangerous precision. Both of these qualities have dramatically accelerated our rise through the food chain. However, perhaps our most valuable adaptation is the homo sapien capacity for running.

On the planet today, there are only a few mammals that can compete with a human’s ability to take on mile after mile without significant fatigue. Our energy chemistry, biomechanical structure, and a unique ability to dissipate large amounts of heat into the atmosphere make us fearsome long-distance machines. Horses, big cats, and antelope run faster, but they also overheat much more quickly, and in the long run, elite human athletes will overtake them. Perhaps the only animals in the world that might have a chance at beating us in a marathon are sled dogs (only in the cold), camels and ostriches.

Science has allowed us to understand more and more about our phenomenal ability to run. Many academics and sports scientists have spent years investigating the history of human biomechanical and anatomical adaptations to running. We have also begun to research the neuromuscular processes that allow us to learn and make minute adjustments to our running kinetics in order to eke out even greater efficiency.

This research points to one of the central principles of science:  Before we can understand the “why and how” completely, we must first describe the “what”. Just last month, a group of researchers at the Loughborough University School of Sport, Exercise and Health Sciences made significant headway in doing just that.

This group of scientists published a novel and robust study that sought to describe the characteristics of running that account for improved running economy and performance. In their publication, the researchers were able to describe several findings that until this time have been primarily theory. Using modern motion capture technology, the researchers analyzed 24 variables in 97 endurance runners. They then correlated these variables with energy cost by measuring VO2 and lactate turn-point measurements, indicators of running economy, while also analyzing how each factor was associated with season best running times, an indicator of runner performance.

Although a majority of the variables were correlated with both economy and performance, there were several of noteworthy significance:

While this may sound complicated, it has very clear implications for runners, athletes, trainers and physical therapists. Our training and rehabilitation of runners must consider and promote these variables. Runners should be attentive to stride, such as how much time each foot is on the ground, and over-striding — when the foot strikes out in front of the body.  We work with our patients to ensure they maintain a more vertical lower leg, a pointed toe at touchdown and a smaller range of movement at the knee and hip during touch-down and stance. These modifications can help to optimize pelvis movement by reducing braking, vertical oscillation, and transverse rotation, ultimately enhancing running performance.

There are no hard and fast rules or recipes for progressing runners from point A to point B. Each runner may require individual cues, both complex and simple, that make sense to him or her. A few simple cues to “run more lightly or softly” or to “try to activate your glutes as your toe leaves the ground” might help improve these three predictors of running economy and performance.  Where can our bipedal adaptations take us?  Let’s keep pushing the limits as a species, use our brainpower to maximize our running power and maybe we will be able to give those camels and ostriches a run for their money someday!

Daniel Green, PT, DPT, is a physical therapist at PhysioPatners.  He can be reached at danielgreen@physiopartners.com or (773) 665-9950.