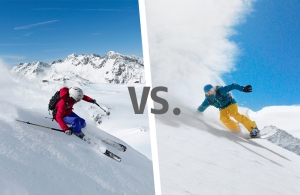 It’s officially winter and time to hit the slopes!  Skiing and snowboarding are two of the most popular winter sports worldwide with an estimated 11.3 million skiers in the United States alone in 2010. While skiing and snowboarding share similarities, key differences in equipment create different challenges, which are reflected in the rates of injury for the two sports. A recent study analyzed more than 1500 injuries for the Big Sky Ski Area during a period from 1995 to 2000 and from 2009 to 2010
for acutely injured skiers and snowboarders.

Snowboarding tends to be participated in by a much younger crowd, which
is reflected in the rates of injury. The average age of injury in snowboarders is 24 years old with 73% being male. Snowboarding injuries are dominated by the upper extremity with the shoulder and wrist (20% each) being the most, hand and elbow (9.2% each),
and knee/ankle (10%) accounting for the majority of the lower extremity injuries. Snowboarding injuries tend to decrease with experience;  beginners account for 31% of injuries, early intermediates at 20%, advanced intermediates increase to 27%, and experts decrease to 16%.

Certain strategies can help prevent injuries so that you can enjoy a full season of skiing or snowboarding. Protective equipment, such as helmets and wrist guards can be used to prevent injuries, particularly in snowboarding.  Second, education of etiquette and safe behavior (no use of alcohol, defensive skiing/snowboarding, etc), and if you are a beginner, receiving formal instruction are all methods to reduce injury risk.  While few studies have looked at exercise or strength recommendations to reduce injury specifically, many ligament injuries are due to a lack of stability and fatigue.  If you have a full day on the slopes planned, it may be worthwhile to give yourself an extra break or two to allow your muscles time to recover so that you do not hurt yourself due to fatigue.  Additionally, since both sports have high levels of speed and forces, ensuring good strength and flexibility of the core and lower extremities can help prevent injuries, as well.

A physical therapists can identify muscle imbalances and lack of flexibility that can be addressed prior to your next ski or snowboarding trip with an annual physical therapist exam.  In the unfortunate event of an injury, we also offer free injury screenings so you can anticipate how long you will be out of commission.

Have fun on the slopes and stay safe!